How Does Alcohol Affect The Memory?

Now that you know even moderate intake of alcohol can reduce the size of the hippocampus, it’s important to provide more info about this brain area. What does hippocampus, exactly, do? Hippocampus is a region of the brain associated with many functions, primarily your memory. The term hippocampus derives from the Greek word hippokampus (hippos meaning horse and kampos meaning sea monster). The reason behind this name is a unique shape of hippocampus; it resembles a seahorse.

The hippocampus is located in the inner or medial area of the temporal lobe, and it is a part of the limbic system. The limbic system is important for our emotional response. One of the most pronounced functions of the hippocampus is its involvement in storing long-term memories. This brain area is also involved in navigation and spatial processing. Therefore, alcohol’s impact on atrophy of hippocampus can weaken your memory.

Alcohol leads to an early decline in memory

Sure, numerous studies have confirmed negative effects of alcohol on memory, but we usually assume memory loss occurs later in life. A team of scientists at the University College London found that memory loss due to alcohol occurs earlier than previously thought. For the purpose of their study, scientists analyzed data of 5054 men and 2099 women from the Whitehall II cohort study. The mean age of participants was 56 years. During the ten-year course of the study, alcohol intake and cognitive abilities of subjects were analyzed.

Results, published in the journal Neurology, found that alcohol consumption was stronger associated with faster cognitive decline, decreased executive function, and weaker memory in men. What’s more, findings showed that heavy or habitual drinkers are likely to start experiencing memory lapses that are commonly associated with aging about six years earlier than their counterparts who don’t drink.

Dementia is a term that refers to neurodegenerative diseases associated with cognitive decline, memory loss, and impaired social functioning. Alzheimer’s disease is the most common form of dementia.

Figures show that someone in the world develops dementia every 3 seconds. It is estimated that 2017 ended with 50 million dementia patients across the globe, and it is expected that the number of people will dementia will rise to 75 million in 2030 and 131.5 million in 2050.

Symptoms of dementia vary based on the exact disease, but they usually involve memory loss, disorientation, problems communicating, difficulty completing simple tasks, misplacing things, personality changes, and many others.

At this point, the exact cause of dementia is unknown which is why there is no cure to eliminate it. That said, different risk factors for dementia have been identified, and alcohol is one of them. Research published in the Lancet Public Health provides strong evidence that people who engage in heavy drinking sessions severe enough to end up in the hospital are putting themselves at serious risk of vascular dementia and Alzheimer’s disease.

For the purpose of this groundbreaking research, scientists looked at more than a million people diagnosed with dementia in a period between 2008 and 2013. More than a third of all patients, 38% or 57,000 cases of early-onset dementia were related to alcohol directly. About 18% of dementia patients had an additional diagnosis of alcohol use disorders. In other words, alcohol use increased the risk of dementia by three times.

Besides shrinkage of the hippocampus, killing brain cells, activating GABA receptors, now we have yet more evidence that alcohol negatively affects memory. This study showed it increases dementia risk and it could correlate with the above-mentioned research that alcohol use creates memory lapses six years earlier than normal aging process.

Not only does alcohol cause shrinkage of the hippocampus, but it also alters gene expressions in this area, according to a study published in the September 2017 issue of the journal Alcohol. The idea behind this study stems from the past research about atrophy of the hippocampus and the fact that adolescents engage in binge-drinking sessions more frequently nowadays. The excessive use of alcohol has become a public health concern, scientists explained. 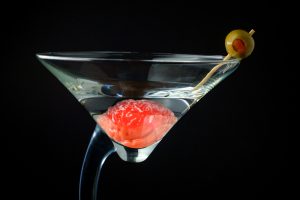 Findings revealed that alcohol altered 416 of 11,727 genes expressed in the ventral hippocampus. Shockingly, alcohol intake decreased pathways and genes involved in long-term potentiation, neurogenesis, and axonal guidance, all of which can impair memory function.

On the other hand, in the medial prefrontal cortex alcohol altered 638 of 11,579 genes. At the same time, genes associated with stress and inflammatory pathways were increased. Based on these results, scientists concluded that adolescent binge-like alcohol use alters the development of medial prefrontal cortex and ventral hippocampus, thus inducing long-term consequences in memory and learning abilities. This could also lead to impulsive and out of control behaviors in teenagers.

A vast majority of teenagers and adults drink alcohol which can have negative effects on their overall health and well-being. One of the many negative effects of alcohol is memory loss. Alcohol affects memory in many ways, as described in this article, but more research is needed to uncover all the underlying mechanisms. It’s always useful to avoid consuming too much alcohol.

Effects of Alcohol On The Brain