Phytoestrogens-Should You Be Eating Them or Avoiding Them?

Phytoestrogens are otherwise known as plant based estrogens, which many men have been told to stay away from when it comes to their sexual health in particular. There have been studies conducted that link consumption of foods high in these phytoestrogens to promote the growth of the breast tissue itself and tumors like cancers of the breast as well.

Conversely however, some studies have shown that phytoestrogens have the opposite effect in that they can help fight against cancer, so should you be eating these foods or avoiding them?

First of all, what is a Phytoestrogen?

A phytoestrogen is basically the plant’s version of the human hormone estrogen. These chemicals are used by plants in conjunction with other chemicals by plants to fight off herbivores. These chemicals are specifically designed to disrupt the fertility of the animals that eat them, which is important to consider in our consumption of these foods as well.

Phytoestrogens aren’t essential for our bodies to survive, so the obvious answer would be to avoid them altogether. The problem with that is that many popular food staples worldwide like soy for example, are full of these chemicals.

What Are the Benefits from Eating Foods Rich in Phytoestrogens?

Another benefit of phytoestrogens are their potential to fight against arteriosclerosis, or the hardening if the blood vessels due to build up of fat and cholesterol. This is believed to be accomplished by its role in the regulation in hormones throughout the body.

If you’re having problems with libido, phytoestrogens may help you there as well. Phytoestrogens are found in many varieties of beer which not only increases your sex drive but also helps delay ejaculation as well.

Phytoestrogens help with reducing rates of obesity as well, in that they have shown to influence weight loss.

What Are the Negative Aspects of Eating Phytoestrogens? 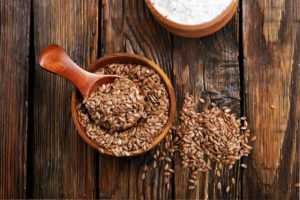 While research does show that eating phytoestrogens can be beneficial, there are negatives when it comes to these foods as well. Many of these problems involve fertility so if you are planning on having a child anytime soon, you may want to eliminate foods high in phytoestrogens from your diet at least temporarily.

Studies have shown that certain chemicals in the phytoestrogen family can reduce the rate of pregnancies not only in humans but other animals that eat these plants as well such as deer, mice, goats and sheep. The bright side however is that studies showed that when these foods we removed from the diet, the individual regained their ability to have children over a period of time.

Studies also show that these phytoestrogens affect hormonal balance in the bodies which can be especially problematic in younger children and adults who haven’t fully completed their development. These chemicals also increased the frequency of allergies developed as a result as well.

Another reason to avoid phytoestrogens is because of their link to cancers such as breast cancer. Again the science is sort of fuzzy when it comes to phytoestrogens and cancer, as they show lower levels of contribute to cancer, while higher concentrations inhibit cancer. This bit of information does nothing but confuse things further.

So Should We Be Eating or Avoiding Phytoestrogens?

Phytoestrogens are found in so many of our foods, including oats, flax seeds, carrots, barely, apples and other foods we eat on a daily basis that it would be impossible to eliminate them. Plus, they provide other benefits that outweigh the potential negatives of containing the phytoestrogens themselves.

One food that is high in phytoestrogens that you should avoid however is soy. Not only is it high in these chemicals, but soy prepared in the United States isn’t fermented and doesn’t come with the probiotics like the soy overseas. The product simply isn’t as good in the United States and is one you can generally avoid.