Spice Up Your Life – 4 Health benefits of Spicy Food

There’s nothing like adding a bit of spice to a dish to give it a fiery boost and shake off the winter cobwebs. Some of the greatest cuisines in the world use spice to enhance their foods, from Thai to Chinese, from Indian to Cajun. Spice can come in a variety of forms, from chili to cayenne, but however you are adding it, it really helps to boost the body.

Surprisingly, despite the warnings of stomach ulcers and mouth burns, spice can be good for the body in moderation. While overly hot curries that put hairs on your chest can prove a problem exiting after a night of heavy drinking, introducing a small amount of spice to your meals can boost the immune system and get things flowing. Here’s how: 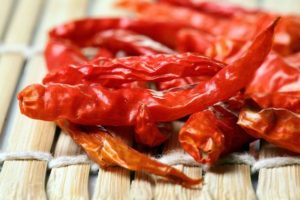 The main spicy component of peppers like jalapenos, cayenne and chili is an active ingredient called capsaicin. This has been shown to reduce bad cholesterol in the body, which helps heart functioning. Studies by the American Chemical Society have shown promising results from using capsaicin to help the heart, as it breaks down the build up of cholesterol at an increased rate. It has also been shown to block a gene which can lead to a narrowing of the blood vessels, which increases the risk of a heart attack. By blocking this, it opens the vessels, increasing blood flow around the body. Equally, these types of peppers are full to the brim with vitamins A and C which help to strengthen the walls of the heart as well as building the immune system, while the heat of the pepper lowers blood pressure in the body.

Many people who suffer from anxiety and depression do so because they have a lack of serotonin in their bodies, which is also known as the happy hormone. Studies have shown that spicy food increases the production of serotonin in the brain, which helps to lower cortisol levels, another hormone which causes stress.

On a very basic level, diet food can be a little bland, so adding spice can help you stick to eating healthy foods by making it a little more bearable. Equally, however, spice kicks your metabolism into overdrive as capsaicin has a thermogenic effect which raises the body temperature helping you to burn more calories. Studies have shown that spice can increase metabolism rates in excess of 5% by stimulating brown fats (or good fats) which help metabolism to function. This effect can last for around 20 minutes following a meal. 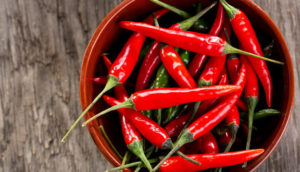 Curcumin is found in turmeric. While not a very hot type of spice, turmeric has a peppery flavor which can be added to all kinds of dishes and has been used in India for many years. Evidence has shown that curcumin has a powerful effect on reducing the growth of cancerous cells while also keeping them at bay. It is used extensively in herbal medicine as an antibiotic, anti-inflammatory, and due to its antioxidant properties; all these things that help toward cancer prevention. However, further studies have shown that capsaicin can help with prostate cancer. Studies from Cedar-Sinai Medical Center in LA have shown that it can kill cancer cells associated with prostate cancer, reducing the cancer by 80%.

While spices can be healthy for the body, be aware that hot sauce is usually stuffed full of sugars, so while sprinkling cayenne on your food is a positive, a whole lot of hot sauce isn’t so much of a bonus!

9 Ways to Get Better Sex

A Buying Guide for Men – How to Surprise Women With Gifts

Best Foods and Drinks to Have Before Bed

9 Supplements Every Man Should Probably Be Taking

Are You Wondering What Drinks You Can &...

The Benefits of Vegetarianism